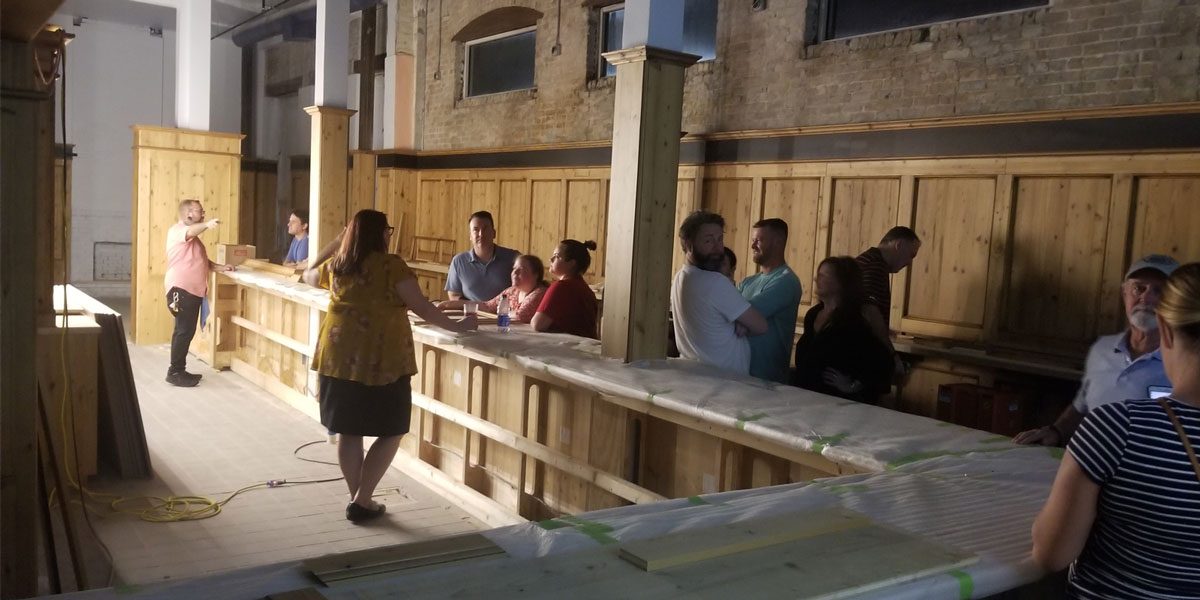 In May, readers of HistoricDowntownSanford.com’s Growth Watch heard all about ‘Project Hollerblock’ and the $1.6 million expansion of the famed Sanford restaurant Hollerbach’s Willow Tree Café. These plans were ambitious, including our city’s very first rooftop bar.

Often, and perhaps not unexpectedly, developers and business have their timelines pushed back due to various delays; we are very happy to report that is not the case at Hollerbach’s! After being given a tour of the bar portion of the expansion project last week as part of a new business event held by the Sanford Historic Trust, the elaborate and stunning bar made by German artisans Hartmann bar builders has made its way across the Atlantic and will be serving up ‘gemutlichkeit’ this November, with the upstairs bar and rooftop following approximately in January 2020.

— The bar has been entirely constructed from two 300 year-old trees, shipped into Sanford in pieces, and reassembled.

— No televisions! This takes away from the experience of enjoying the ‘warmth, friendliness, and good cheer’ that comprise gemutlichkeit. (Don’t worry, using a projector, a large open space over the bar will show Hollerbach’s famed duo Jimmy and Eckhard live as they regale the crowd from the stage… and of course, World Cup soccer matches.

— The Hartmann Schreinerei+Innenausbau (woodworking and interior decorating) shop from the small town of Falkenberg-Taufkirchen has been in business for over 100 years and employs around 35. The main focus of their work is designing and building high-quality, ornate bars at breweries, restaurants, hotels and other locations. In addition to the new Erdinger bar here at Hollerbach’s, their resumé includes work in:

Sanford proudly joining the company of locales such as Manhattan and Hong Kong owes entirely to the prominence of Hollerbach’s Willow Tree Café, which according to Hollerbach-Simmons has the largest sales volume of Erdinger and Bitburger beers in the United States, even over world class destinations such as Epcot, and is also the top seller of Tucher beers on the east coast of the United States.

Oktoberfest will soon be upon us in Historic Downtown Sanford (Friday, October 11 – Sunday, October 13), so grab your stein and lederhosen and head on down to the party; Hollerbach’s is getting even more Wunderbar! Prost!