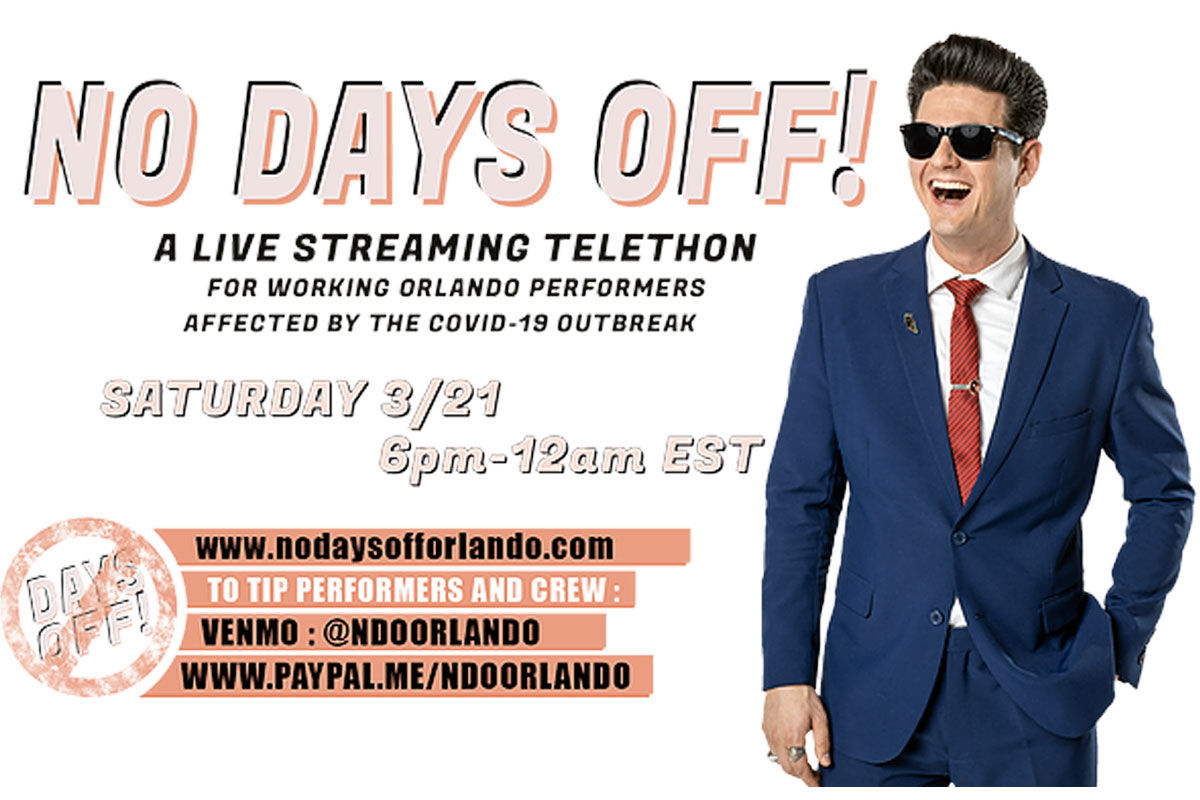 Sometimes good ideas and kind intentions can even outpace a virus. In this case, it was local musician, actor and author Andy Matchett, who came up with the idea of staging a virtual live-music telethon to benefit musicians hit hard by the lightning-fast economic impacts of the coronavirus pandemic on our community. In short order, Matchett had a location – Blackburst Studios in Mills 50, an able co-conspirator in Miss Holly Dawn, a camera crew and a stacked lineup of some of Central Florida’s best musicians. And Saturday night, we plopped down in front of the computer screen to take in six welcome hours of music as Matchett’s No Days Off telethon went live on Youtube.

First up, promptly at 6 p.m. was Matchett’s project Johnny Wild and the Delights, rushing headlong into a cover of “Dancing in the Streets.” Matchett strikes Elvis Costello poses while the band charges through covers of “Blue Suede Shoes” and “Oh Boy” with rockabilly swagger, augmented by a fiddle and a cadre of incredible backup singers.

After the set, Matchett doffs his shades and delivers a touching intro about how dedicated the whole crew putting this shebang on is. And before we get any further, I gotta say, there are some tech glitches and camera gaffes here and there. But the show is all the better for it! The vibe is casual and intimate, calling to mind the wee hours of the Jerry Lewis telethons – where his tie gets loosened and anything goes – and the best of public access television shows like TV Party, early Elvira broadcasts, and old variety shows. It’s that essential human touch.

Marilyn Friedland of Run Raquel was up next with a stripped-down solo set that showcases her powerhouse voice, culminating in a powerful Florence & the Machine cover. Next, Big Tiki & the Mai Tai’s injected some much-needed surreality and humor with a look and sound that is fully committed to the tiki-bar lifestyle. The “Pineapple Princess” cover was top-notch. Amanda Lyn impresses with a sound reminiscent of Sheryl Crow and a very effective cover of ‘80s gem “99 Luftballoons.”

The Oak Hill Drifters really bring down the house after that with a performance that stretches to nearly an hour (by popular demand). They deal in stellar, raucous rockabilly noir and throw in covers from Patsy Cline and Husker Dü. The band have a look and sound that would make them a natural for a Twin Peaks bar scene.

Lauren Carder Fox, though a solo act, creates a big sound with the aid of a drum machine, loop pedal and her own jazzy vocal delivery. She delivers the transition of the night when she follows a Van Morrison cover with a Lizzo tune. Mayor Buddy Dyer virtually pops in with a pre-recorded message of support and at 10:00 p.m. things get a lil’ steamy with performances from members of the Corsets & Cuties burlesque troupe. Bebe Caliberr, Teddy and Miss Lady Jaimz bring some much-missed and excellent afterhours cabaret vibes to the studio.

Zelda Grey catches everyone off-guard with urgent and earthy folk coupled to a raspy, bluesy vocal delivery for extra oompf. By the end of her set, a hushed cover of “America the Beautiful,” everyone’s got chills.

And now for something completely different … the Ludes! These Central Floridian masters of bluesy, swampy Southern sludge give no quarter and they close with a ridiculously relevant cover of Motörhead’s “Stay Clean.” On the nose. The penultimate act, Elizabeth Ward – sadly minus Jordan Foley, who stayed home in an abundance of caution after feeling a little off – delivers a performance of classic Americana and plays spine-tingling, prayerful covers of “Imagine” and “Amazing Grace.”

At midnight, the heart and soul of Central Florida music, Eugene Snowden, is here to bring it home. Looking roguishly dapper, Snowden opens his set with a paint-peeling howl and it’s off to the races. Snowden leads an all-star ensemble through a loose and heavily improvised set of burning, James Brown-conjuring soul. Snowden is a dynamo, constantly weaving on and off camera. He closes his set with a raucous reading of “Put a Little Love in Your Heart” and it’s heartfelt, messy and joyous all at once.

The closer is the whole gang coming together for a Matchett-led group finale of Hank Williams’ “I Saw The Light.” Everyone is collectively exhausted and elated. On both sides of the screen.

Matthew Moyer is a music and arts writer and enthusiast living in Orlando. He loves his cat very much.