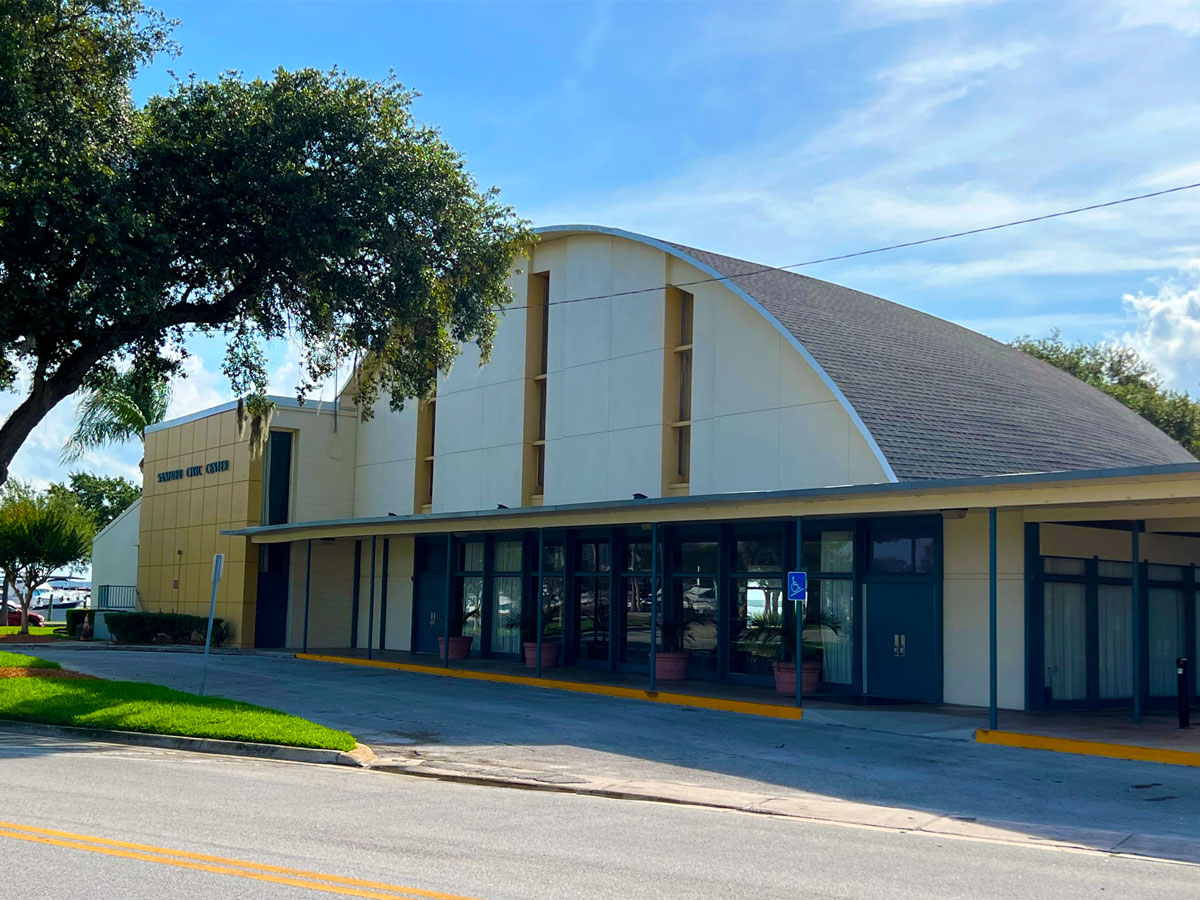 Historically and architecturally significant, the Civic Center is one of the 50 flagship structures featured in Florida’s Mid-Century Modern Architecture (1945-1975) by the University Of Florida School Of Architecture. This shortlist of architecturally significant buildings define the range of modern design in mid-twentieth century Florida and are eligible for the National Register of Historic Places. The growing appreciation for this “Flagship” building has inspired the Sanford Historic Preservation Board and the community to request local designation for the building, and sparked interest to shift the period of historical significance for the City’s preservation program to include structures from this era.

Overlooking scenic Lake Monroe, the Sanford Civic Center, built in 1958, was “believed to be unique in the country.” Architect John A. Burton’s design was praised by the press as the “most modern structure of its kind in the country and as the most versatile,” and was featured on the front page of Southern Building Magazine. The original construction included 1.8 acres of building and covered walkways, constructed by Carroll Daniel Construction for $279,000. The main feature is an auditorium, which is roofed with a series of Glu-Lam beams. The dramatic open space is enclosed with fixed glass windows on either side of the arc. The youth recreation area was housed in a long curving wing.

In 1990 a major interior and exterior renovation was completed, adding stucco acoustical panels on the east and west sides of the auditorium building and removing the original glass. Nils Schweizer (1925-1988), a celebrated Central Florida architect, who studied in the prestigious Taliesin Fellowship program and maintained a working relationship with Frank Lloyd Wright, designed the renovation, constructed by Wharton Smith.

Since opening in 1958, the Sanford Civic Center has been the focus for community events, the naval academy’s graduations, high school proms, weddings, local service club meetings, luncheons, political rallies, and recreational activities for children and senior citizens. For the first 10 or so years, the African American community was denied the freedom to participate in events in this public facility. In 1960, Black teenagers belonging to the Young Men’s Social Club at Crooms Academy attempted to attend a dance at the Civic Center and organized a protest downtown to allow access to the facility. They were not successful but persisted. The next year, 38 African American Sanford residents signed a petition, drawn up by the Florida NAACP, requesting to “abolish forever the practice of racial segregation in the use of all parks, playgrounds and recreational facilities in the city… No citizen of the city shall be denied the use of any place or recreation facility because of race or color.” For the past 50 years, the Sanford Civic Center has been open to all. This segregated history is now seen as a regrettable but valuable part of the building’s story, and links the building to social justice movements.

“The Civic Center is important to the City of Sanford both historically and architecturally. When demolition and replacement were proposed, we decided instead that we should work to restore the Civic Center and reuse it rather than build new. It is my hope through restoration and appropriate additions we can provide a center that will serve the city another 65 years,” said Mayor Art Woodruff.