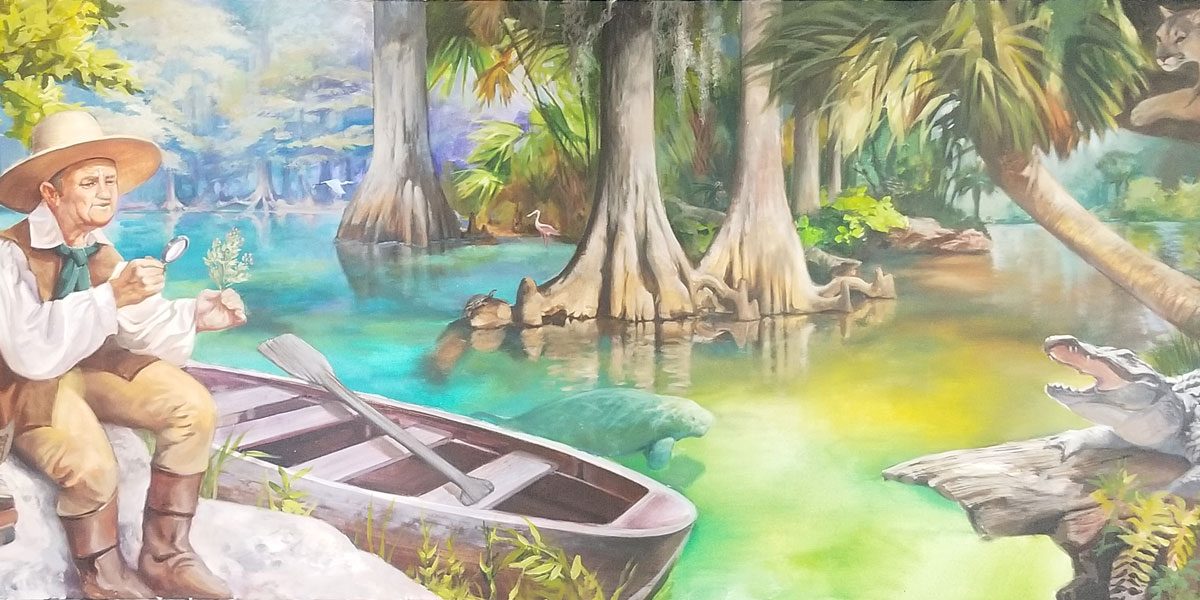 Sean Kelley stands and surveys the spot where former U.S. President Grant dedicated the South Florida Railroad on January 10, 1880 and simultaneously considers the past and future of Sanford’s original rail hub.  Coming from a real estate background as the owner/broker of Saint Lawrence Title, Kelley was lucky enough to see the energy building in Sanford in the summer of 2016.  “I made a leap of faith buying the old (train) depot, and the whole concept was not planned.  It just happened around what I was working with and quickly became a project that captured my heart and soul, which I have poured every ounce of into.”  While he is quick to credit his friends, family, contractors, and the city all playing key roles in moving this project forward, the transition from an old, abandoned freight depot into an upscale grouping of numerous culinary options is an idea that is quintessentially his own.

This site has a long history, and as Kelley has dug deeply into the project, it has enhanced his love and excitement for Sanford as a whole.  Henry’s Depot is located on the site of Sanford’s original rail tracks, the Orange Belt Railroad system, which first laid its tracks in 1880.  The upcoming culinary collective is named for transportation entrepreneur Henry Plant, who purchased the Orange Belt line in 1885, tying it to the rest of his rail empire that crisscrossed the state of Florida.  This structure once served as the freight depot for Plants’ rail system which provided Florida orange growers’ better connections and cheaper access to Northern markets, and was tied by numerous tracks to the small passenger terminal at his PICO (Plant Investment Company) Hotel, constructed in 1887 for the accommodation of his railroad and steamship passengers to Central Florida.

The freight station, as rebuilt in 1940, was a 6000 SF structure up until the time Kelley purchased it in 2016.  Since beginning construction and remodeling in 2018, Kelley and his team have expanded the venue to 7800 total air conditioned square feet, added an expansive deck along the west side, and enlarged the south facing back patio, all whole providing a historically themed modernization to what was essentially a shell of concrete block and roof, with limited electrical and no air conditioning.  Henry’s Depot pays homage to the late 20th century wood and iron train depot by incorporating numerous historical reflection pieces, such as the old freight scale, authentic period signage, prints enlarged from originals in the Sanford Museum, and an overall ‘wood and iron’ feel that will transport guests back in time.

Henry’s Depot will operate as a ‘food hall’ with several select upscale, gourmet vendors hand-picked by Kelley.  “As a foodie myself it has been priority one to be very selective about the vendors that are going to be a part of Henry’s Depot,” says Kelley, “(and) it is extremely important to have a good mix that hits all the notes, and I believe that we have a selection that will please everyone’s palate.”  That mix will consist of the following vendors:

These food choices will be supported by a large bar and taproom called The Basin, which will be at the north end of the building, opening up to the prominent outdoor patio featuring live music and a gentle breeze off of Lake Monroe.  In naming ‘The Basin,’ Kelley has given a nod to the Wekiva River Basin and St. Johns River, and winds the clock back a bit further to ‘Old Florida.’  Taking center stage above the back bar are two commissioned pieces from artist Keith Goodson, depicting the early days of settlement along our waterway that served as Henry Plant’s highway into Central Florida in days gone by.  Kelley says that when guests visit The Basin, “you can ask about the story behind each painting and be given a card to read about the experience for yourself.” If you would like to take the history home, prints of the artwork will also be available for purchase.

Henry’s Depot will offer superior convenience when compared to typical food hall models; to make the experience more enjoyable, a ‘single point of sale’ concept will be implemented.  Guests in groups desiring to place orders from different or multiple vendors will not be forced to “gather up something for everyone at each different space, then hunt for a place to sit,” says Kelley. “We will have plenty of seating both indoor and outdoor.  Because of the size of the building we have several options to enhance the experience by sitting inside, at the bar, on the west side deck, back patio, or the southern-style front porch.”  While sitting on the old southern style front porch, under the eye-catching 25’ tall copula that overlooks brick-lined 1st Street, you will be able to spot the free Sanford trolley which connects Historic Downtown Sanford to the Amtrak and SunRail stations.  Bob Turk, Sanford’s Economic Development Director, is especially excited about the growth within Historic Downtown Sanford, “especially as we stretch development west down 1st Street.  (Henry’s Depot) is a project that will do very well and we are grateful for Sean Kelley’s investment into our community.”

Planning a trip into Historic Downtown Sanford is not only convenient, but also a fun and historic outing that will provide a memorable trip back through time.  Henry Plant, when speaking about the railroad expansion in the 1880s, said that “We are not working only for the present, but for the future.” For a time, as the building lay dormant, that future looked uncertain.  In bringing Plants’ historic train station back to life, Kelley has given this once prominent structure of downtown Sanford new life by paying homage to the past while incorporating a modern culinary destination.  Kelley believes that the future for Sanford is very bright, and you would be hard pressed to find a local who disagrees with him.  Thanks to his tireless work, dedication, and investment into our history, Henry’s Depot will hold a prominent spot in the next several decades of our city’s history.

The Basin will be welcoming patrons by the end of July, with the eateries to follow shortly thereafter as they complete their permitting and build-outs.