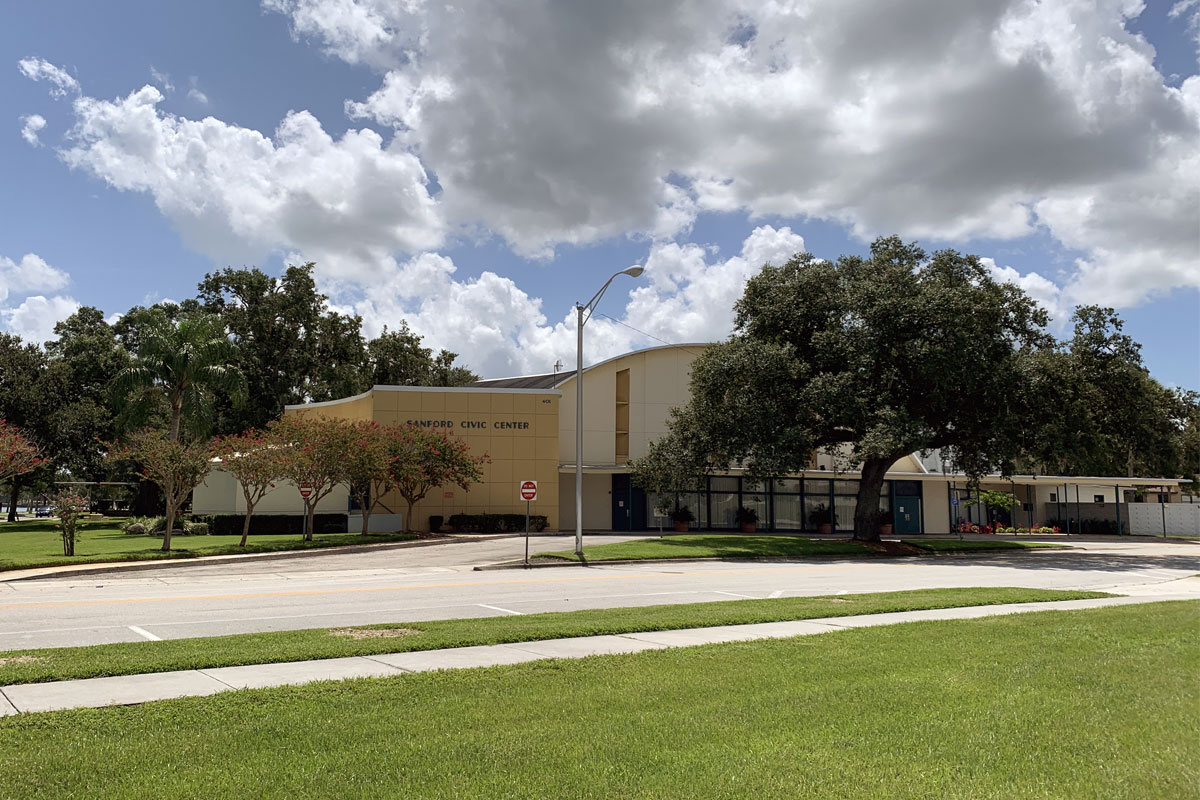 Amid a rising tide of new development in Historic Downtown Sanford, the Sanford Civic Center has been a topic of great discussion, revolving around one central question. Is it time to replace this Mid-Century Modern building, or can it be brought into modernity?

In early July, the City of Sanford was notified by the Department of State’s Division of Historical Resources that funds towards a small matching grant have been awarded to assess the cost and viability of refurbishing the Sanford Civic Center (401 E. Seminole Blvd, Sanford FL 32771). With that data, the City Commission may better be able to apprise the situation and move forward with plans both for the Civic Center and the surrounding area with more certainty.

The Florida Trust for Historic Preservation announced their list of “Florida’s 11 to Save, the most threatened historic properties in the state” in 2019. Included on that list was the Sanford Civic Center, built in 1958.

The Civic Center regularly rented for various small and mid-sized functions ranging from political candidate hob-nobs, gun shows, the annual military appreciation event put on by the city, and other functions. In order to accommodate larger events, critics point to the infrastructure upgrades that are needed. Acoustics need some work, and the amenities (kitchen, bathrooms) certainly need an overhaul. But is the answer to tear the building down and build the modern venue Sanford could benefit from?

Mayor Art Woodruff commented to me earlier this month that “My goal is to renovate and keep the Civic Center. I hope assessment comes out that we can. Is it big enough? Is there a way to expand it? We had seen a previous proposal with wrap around space, adding parking but keeping the main part of the Civic Center intact.” Of course, any Civic Center discussion dovetails with the pending 3 block development of the “catalyst site,” Heritage Park, as these assets will hopefully synergize and bring out the best in each other.

Architect Rich Heisenbottle of Sanford Waterfront Partners, the developers behind Heritage Park, a proposed development that will neighbor the venue, had much to say about the future of the building. Heisenbottle has over four decades of expertise in all aspects of architecture and interior design, specializing in historic preservation and theater arts projects. Mr. Heisenbottle’s work is well known in the State of Florida for the restoration of some of the area’s oldest and most prestigious landmarks. When asked about the Civic Center, he states that “the Sanford Civic Center is a better building than we give it credit for. Restored and enhanced properly, we could have a building we can use. It needs new AC, electrical, glazing, and to be brought up to date. But the idea of tearing it down and building something new in our view would be a big mistake and not cost effective. That Mid-Century Modern architecture should be celebrated.”

Joining in the chorus of those in favor of protecting history is Zach Waters, President of Sanford Historic Trust. Waters said that “the Sanford Civic Center is an incredibly unique building, and the Sanford Historic Trust looks forward to what the future assessment will reveal about restoration of the building to its original glory. The Sanford Civic Center can be the premiere event location in Central Florida.”

Across the board, in speaking with the city, architects, neighbors, and local organizations, all seem to favor refurbishment over new construction. The bottom line is that the assessment and projected costs will dictate the options, and thus the plan, for the city. If the cost is feasible to have the Civic Center properly renovated and marketed as a venue, most citizens believe this beautiful piece of Mid Century Modern architecture will be a boon to the local economy and a cherished landmark of our fair city for decades to come.