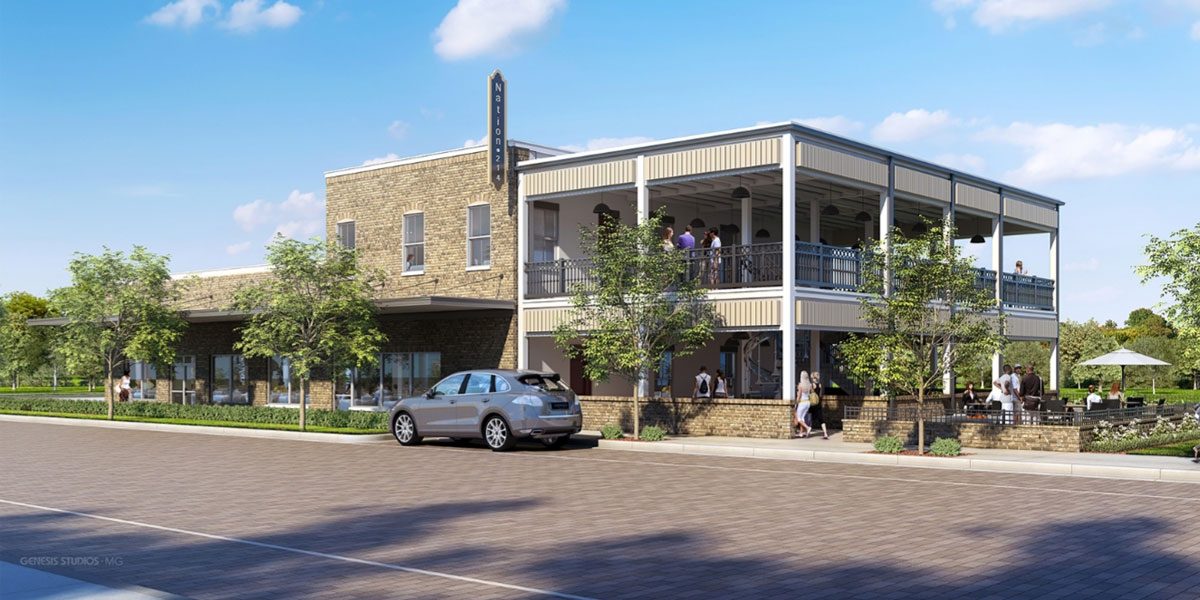 If you spend some time talking to prominent local attorney Mark Nation, you will discover quickly that he is a passionate man, and these days, the businessman is excited about Historic Downtown Sanford.

Nation and his partners have purchased an entire city block of downtown, an area spanning south and west from 2nd Street & Oak Avenue to 3rd Street & Myrtle Avenue and have laid out a very ambitious plan. Working with partner and local restaurateur Chris Parsons of The General Public House in Winter Springs, Phase 1 of Nation’s plan is to deliver a New Orleans-style destination restaurant to Sanford’s burgeoning culinary scene.

It is a sweeping vision that entails a remodel of the existing 1918 building, the addition of a two-story expansion for indoor and outdoor seating, and two catwalks connecting the restaurant and mezzanine-level event center to a distillery.

Speaking to me last week in his offices, Attorney Nation walked me through his impressive project. Seeing the vibrant growth and events taking place in Historic Downtown Sanford, Nation said that his plan is to move “as fast as the city and my contractor will let me.”

With the project located within the Sanford Historic District, Nation’s team has obtained the necessary ‘certificate of appropriateness’ from the City and the Historic Preservation Officer for the project, and excavation of the old foundations to the north of the existing 1918 building that will serve as the restaurant began last month.

Nation says that this project will be “aimed at restoring, repurposing, and remembering a historic block and over 100 year-old building”, while continuing to revitalize the west side of Historic Downtown Sanford. Phase 1 will focus on the east side of his block, where a 4680 SF building originally erected in 1918, once owned by Chase & Co., will be transformed. Demolition of the kitchen began last week, and working within this historic structure, the plans include installing a grand staircase leading to the 720 SF mezzanine dining level which may double as an event center that overlooks the first floor and kitchen.

Nation stresses the enjoyment of his future patrons over sheer profits as he discusses his plans for a comfortable venue, and envisions his project as a “place to enjoy. Where you would want to visit and stay, an inviting destination.” To that end, there are some amazing architectural touches and planned open space concepts being utilized to bring his vision to reality.

A thirty foot expansion to the north side of the building will provide seating for additional restaurant guests, with the entirety of the second floor being outdoor seating, overlooking a stage that will be surrounded by a spacious 24 foot wide open green area. The lower level of the expansion will provide twenty feet of indoor seating, with a ten foot outdoor seating area facing the green area and stage from ground level. Adjacent and above each side of the stage, the mezzanine will have enclosed catwalks on each end, spanning the distance over the green area and taking guests to the two-story distillery which will front on 2nd St.

This concept will be “something that you’ll want to come and see,” said Nation. While there is no set timeline for Phase 1, as stated above, the project is moving forward as rapidly as possible. The longest estimates call for a late summer of 2020 completion, but there is optimism that timeline may move closer.

The City of Sanford is very excited about the forthcoming economic development laid out by Nation. Sonia Fonseca, the Sanford Community Redevelopment Agency (CRA) Executive Director, pointed to CRA’s recently completed streetscape project on Oak Avenue, which bounds the east side of the project, and forthcoming signage as good investments. “We are very excited about the investment Mr. Nation is making in Sanford,” said Fonseca, “and excited for what his project will bring to our city.”

Beyond the streetscape, the CRA provided as incentives an $88,000 loan subsidy, a $10,000 rehabilitation and façade grant, and a $25,000 new construction grant. Sanford’s Economic Development Director Bob Turk, called this a “tremendous project for continued emergence of downtown Sanford’s West Side.”

Plans call for “over and above” the required parking, with a 50 space paved lot being placed on 3rd Street, to the south side of the restaurant. There will be additional paved angled parking along Myrtle Avenue, facing Tuffy’s Bottle Shop and Lounge, as well as angled paved parking along 2nd Street.

Even with the expansion of the existing building and the erection of another, the stage area bounded by wide green space to enjoy, and ample parking for patrons, much more space exists for Attorney Nation to create his destination in the heart of Historic Downtown Sanford.

Phase 2 of the project will be completed on the west side of the block, on the side closest to Myrtle Ave. The group is still debating the long term vision for this space, and Nation notes that “it’s a huge (piece of) land and space, and we have lots of ideas.” One idea that he is particularly excited about is a spacious pool surrounded by private cabañas, set in a 1960’s style Miami Art Deco motif. With a television in each cabaña, and an expansive big screen television at the end of the pool, this would surely be a place to while away the hours, enjoying drink and food service with family and friends in comfort.

Attorney Nation openly wondered what the community thoughts on his idea for Phase 2 would be, and wouldn’t mind some feedback. What do you think, Sanford? Let us know in the comments!