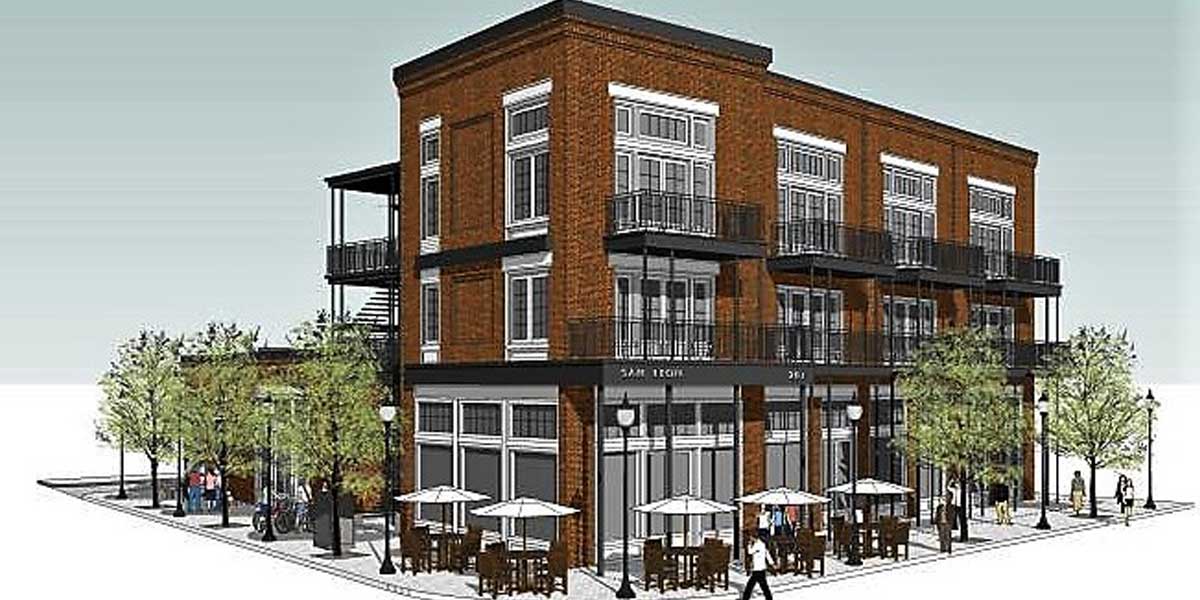 Since the razing of the San Leon hotel in 1917, no new structures have been built on the prominent corner of 2nd St and Sanford Ave, but developer Dan Matthews has moved forward with his plans to revitalize the corner by adding 10 housing units and a 2300 SF retail footprint in Historic Downtown Sanford. This urban infill project has now been three years in the works, but the expectations are that new residents to Historic Downtown Sanford will be moving in – and the economic contribution of this project will begin – in about two months. The timeline for the projects’ overall completion is in the 4th quarter of this year, with two retail tenants dividing the first level of the 3-story buildings fronting the east side of Sanford Ave. “We have had a lot of interest in the retail space in the last 3 months,” said Matthews, “and are hopeful to have something to announce before the move-in of the residents.”

As detailed last March in this blog, Matthews plans to build a 3-story New Orleans-style building abutting the east side of Sanford Ave, and an adjacent single-story building to the north along 2nd St. There will be 10 living units in total, with the 2nd and 3rd floors having 4 single-bedroom apartments, each with balcony overlooking Sanford Ave. The adjacent single-story structure will house the 2 additional living units. The first and third floors will have 12′ ceilings, and second floor units will have long balconies streetside on Sanford Ave running almost the entire width of the unit. Matthew’s detailed that there have been over 150 inquiries to date, but no leases signed to date. Unit sizes will range from 590-800 SF. Additional details, including floorplans and informational requests can be found on the website www.sanleonsanford.com.

Sanford’s Economic Development Director Tom Tomerlin notes that “San Leon is a fine complement to Sanford’s growing downtown scene. Future residents of San Leon only need to walk downstairs to be in the middle of all that Historic Downtown Sanford offers. As we exit the pandemic, we are confident demand will increase for this kind of unique living environment.

“San Leon represents a model that we really want to see replicated in other spots downtown.” Design Architect for the project Jose Venegas likewise sees this type of city-infill project as something that the city may replicate. “There are many parcels of land with ‘upside potential’ with the right incentivization,” said Venegas, “and it’s a benefit to the developers, the City, and the citizens.”

Last year, Sanford’s City Commission approved a tax abatement for the project, a tool that City leaders may use to incentivize needed development and attract tourism. This property tax incentive is usually intended to target smaller, mixed use development. This $3 million dollar private project, after the tax break and Community Redevelopment Agency (CRA) grants are tallied, will net the City of Sanford approximately $155,400 in net benefits over first 10-year period, and the San Leon project will generate $453,200 in total taxing for all local taxing districts.

CRA Project Manager Pamela Lynch commented that “San Leon represents the best kind of new development in Downtown Sanford, because it looked to the historic roots of the property. The project represents the first modern day re-expression of vertical mixed use that made up the historic development fabric downtown. First floor retail with residential use on-top is a tried-and-true development pattern that fits the larger vision of having more residential options downtown.”

Sanford City Commissioner Patrick Austin adds that the San Leon is a “beautiful new addition to downtown. It’s great to have more people living downtown to help support all of our businesses during the week.” We agree!

As for the two longstanding oak trees which stood as solitary residents of the lot, Matthews made great efforts towards keeping the trees. “At one point, I had an arborist come and go over everything. I tried to keep even one of them, but it wasn’t something we could do.” Plans are to incorporate the wood into the commercial portion of the project down the road, as currently the wood is approximately halfway through the needed 2-3 year curing process. The project will also have a lot tucked into the west side of the development providing residents with open air parking spaces.

Look out Sanford, here we grow!