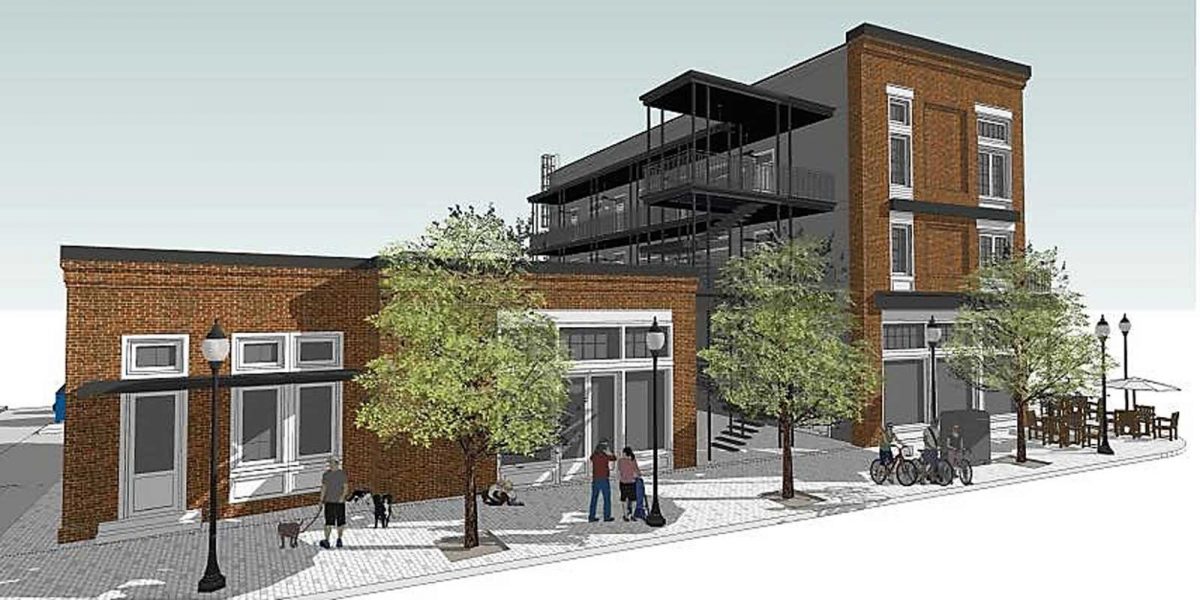 A survivor of the September 22, 1887 fire that ravaged the wooden buildings populating the east side of Sanford, the Hotel San Leon stood on the corner of 2nd St. and Sanford Ave. The hotel occupied the north half of block between 2nd and 3rd Streets, abutting the east side of Sanford Ave, up until the building was razed sometime between 1912 and 1917.  “And it wasn’t long after that,” notes retired attorney and the developer of the lot Dan Matthews, “that two acorns took root right in the middle of the lot.”  Two oak trees have stood a solitary watch over the intersection for over 100 years now, watching the slow and steady progress of the Celery City from a vantage point that was, briefly in the 1920’s, a car lot, but over the last 100 years has largely been vacant.  Since the razing of the hotel, no new structures have been built on this prominent corner, but Matthews has plans that aim to revitalize the corner by adding 10 housing units and a retail footprint in Historic Downtown Sanford.

With a summertime of 2020 groundbreaking anticipated for a mixed use residential and retail project named San Leon in tribute to the past, this urban infill project has been nearly two years in the works.  “And it started before that,” says Matthews. “After I retired from 30 years of legal practice in 2016, I had a goal of developing an urban infill project.  I scouted areas within 150 miles of Orlando, and it took a year to find an appealing lot.  But Sanford has good bones.  The historic area is a draw, and there is a reasonable number of old buildings.  Sanford has good bones.”  After closing on the property in December of 2017, Matthews points to many cumulative factors which have pushed back the timeline to break ground.  “I had no intention the lot would ill be vacant when I closed on the land, but I have never not been working at it.  For engineers, architects, the City, working on a small lot is atypical.  It’s very challenging, working in a limited space.  And these professionals are busy right now, it’s boom time for everyone.  It just has taken this long.”

Matthews plans to build a 3-story New Orleans-style building abutting the east side of Sanford Ave, and an adjacent single-story building to the north along 2nd St.  There will be 10 living units in total, with the 2nd and 3rd floors having 4 single-bedroom apartment, each with balcony overlooking Sanford Ave.  The adjacent single-story structure will house the 2 additional living units.  The first floor of the main San Leon building will comprise 2300SF of retail space, and Matthews is already in discussions with an upscale coffee provider, an amenity he believes translates to greater appeal for his residents.  As for the two longstanding solitary residents of the lot, Matthews made great efforts towards keeping the trees and incorporating them into the San Leon.  “At one point, I had an arborist come and go over everything.  I tried to keep even one of them, but it wasn’t something we could do.  When we do take them down, I intend to incorporate the lumber into something inside (the San Leon), possibly in commercial section.”

The City of Sanford’s Community Redevelopment Agency (CRA) has granted this project a parking variance for the number of spaces, allowing parking for the nits to be tucked into the west side of the lot, as well as approved a $50,000 new construction grant that refunds developers 20% of their construction costs.  “Without the variance, an infill project like this couldn’t be completed,” says Matthews.  In addition to CRA grants, Matthews will go in front of the City Commission later this month to ask for property tax rebate, a tool that the City Commission may use to incentivize needed development and attract tourism.  This property tax rebate is “usually intended to target smaller, mixed use development,” says CRA Director Sonia Fonseca.

In advance of the March 23 City Commission meeting where the vote on any rebate occurs, Fonseca presented some financial details regarding the project to the commission in February.  One tool the City Commission was presented with in February was an Executive Summary prepared using Total Impact Data Source.  Total Impact is a “city-wide (economic and fiscal analysis) tool used to analyze all public work projects requiring a public investment.  This tool is useful in creating a concise report that identifies all future costs of services that will be need to be provided, takes rebates and grants into account, and gives decision makers an actual predicted revenue for a potential project,” explained Fonseca.

So, what does the Executive Summary tell us?  The San Leon project is an anticipated $3M project, and it is expected that 75% – or $2,250,000 – will be added to the tax rolls and result in additional property taxes.  Total Impact assumes projected visitor and worker spending (approximately 38 temporary construction and indirect or induced jobs will be generated), and how much money their spending locally adds to our economy.  Total Impact also assumes that the 10 residential units will be rented with a 90% occupancy rate, and with the caveat that the residents will make the median household income of $31,500, the project is estimated to support an average of $1.2M in new non-residential taxable property each year over the next 10 years.

Bottom line?  Annual taxable venues on the property go from $1717 to over $15,000 annually.   If the City of Sanford approves the property tax rebate, and the CRA grant monies are tallied, overall the City of Sanford will receive approximately $155,400 in net benefits over first 10-year period, and the San Leon project will generate $453,200 in total taxing for all local taxing districts.  If the property tax exemption were taken off the table, the net benefit to the city would increase.  “These benefits do not include permits and impact fees, but is the net of incentives,” said Fonseca. “(It’s a) Project we need in (Historic) Downtown Sanford.  We need beds.”

Beyond the fiscal numbers, Fonseca’s presentation pointed out that attractive new places bring numerous ancillary benefits, and perhaps this project will serve to open the door for more complementary development down the east side of Sanford Ave.   Moreover, street level and neighborhood enhancements lead to more pedestrians and traffic that can revitalize an area.  Matthews believes that “Sanford has everything you want.  History, lake front, everything is going to gel.”

Daniel R. Lewis is a two-tour USAF veteran who owns a recognized legal practice in Sanford, FL. He is heavily involved in a variety of local civic, community, and charitable functions.