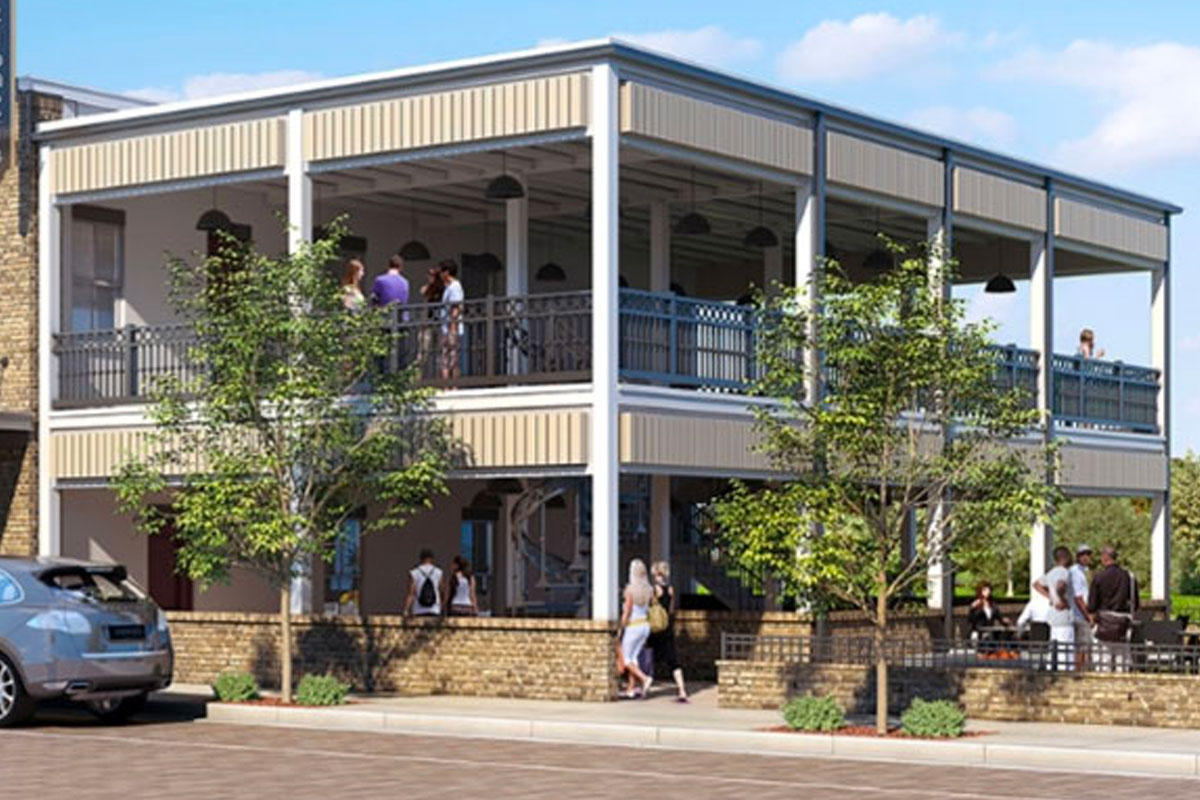 When I first wrote about the forthcoming project from local attorney Mark Nation and his partners, visions of the New Orleans-themed restaurant and distillery generated significant interest. The Nation group purchased a city-block sized parcel of land nestled on the rapidly growing west side of Historic Downtown Sanford, and a year later, it can happily be reported that construction work on the site is moving forward rapidly, and the timeline for the project remains largely unchanged.  Get ready to “laissez les bon temps rouler” and come #Sanfording to this venue next year! 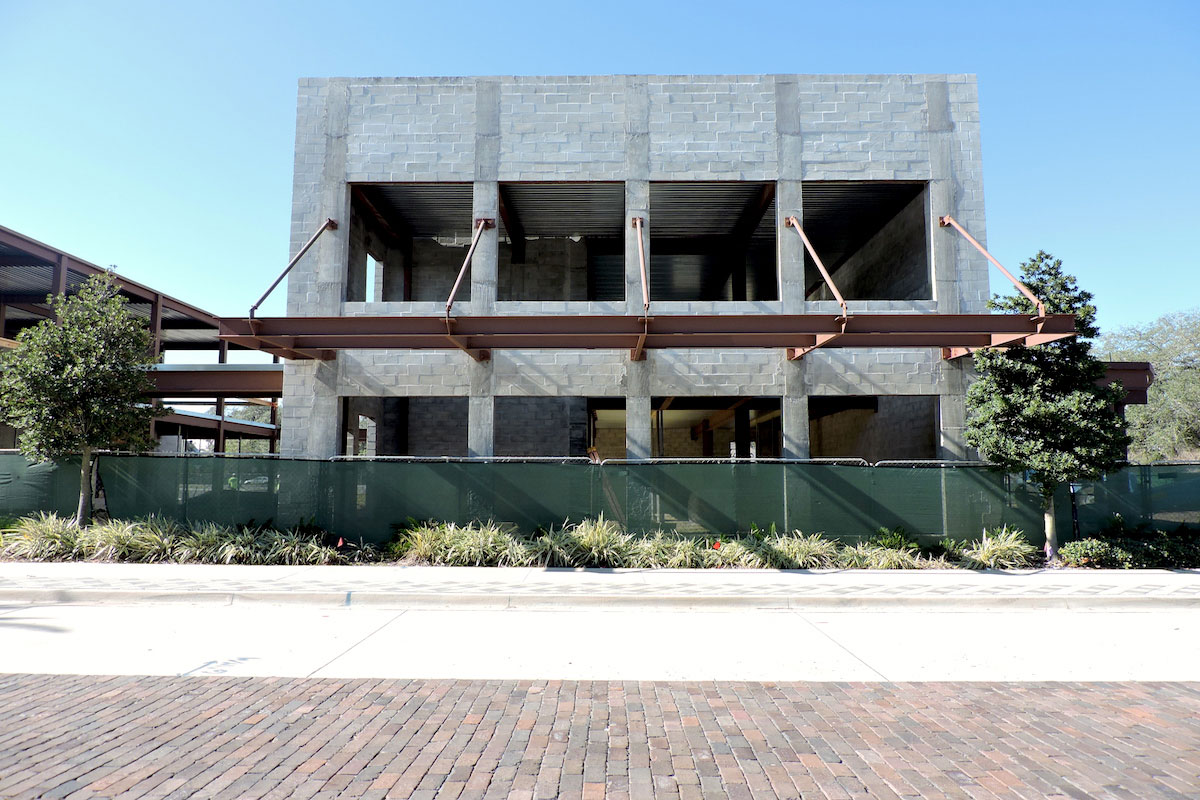 If you missed my first post, or for anyone in need of a refresher, Nation and his partners purchased an area spanning south and west from 2nd Street & Oak Ave to 3rd Street & Myrtle Ave.  Along with partner and local restaurateur Chris Parsons of The General Public House in Winter Springs, Phase 1 of Nation’s plan is to deliver a New Orleans-style destination restaurant to Sanford’s burgeoning culinary scene. It is a sweeping vision that entails a remodel of the existing 1918 building, the addition of a two-story expansion for indoor and outdoor seating, and two catwalks connecting the restaurant and mezzanine-level event center to a distillery.

Located in Sanford’s Historic District, this project has been ‘aimed at restoring, repurposing, and remembering’ a historic block and over 100 year-old building, while promising to continue to revitalize the west side of Historic Downtown Sanford. Phase 1 is comprised of the restaurant and distillery, which are being constructed on the east side of the block, where a 4680 SF building originally erected in 1918, once owned by Chase & Co., is being transformed.

Spend some time talking to Mark Nation, and you will discover quickly that he is passionate and excited about Historic Downtown Sanford, and if you get him talking about his project, it’s clear that he has a distinct eye for architecture and design. Wes McKee, Construction Manager for Nation Development and Construction, will have his crew working on the interior of the building over the next few weeks, installing a grand staircase to lead patrons up to the semi-enclosed 720 SF mezzanine dining level which overlooks the open first floor and kitchen.  Walls will be removed and the dining area opened up, and will allow guests to access the mezzanine and connecting catwalk.  Nation also envisions an open stage between the restaurant and distillery, replete with acoustic tiles and visible from the dining, the mezzanine, and the distillery. 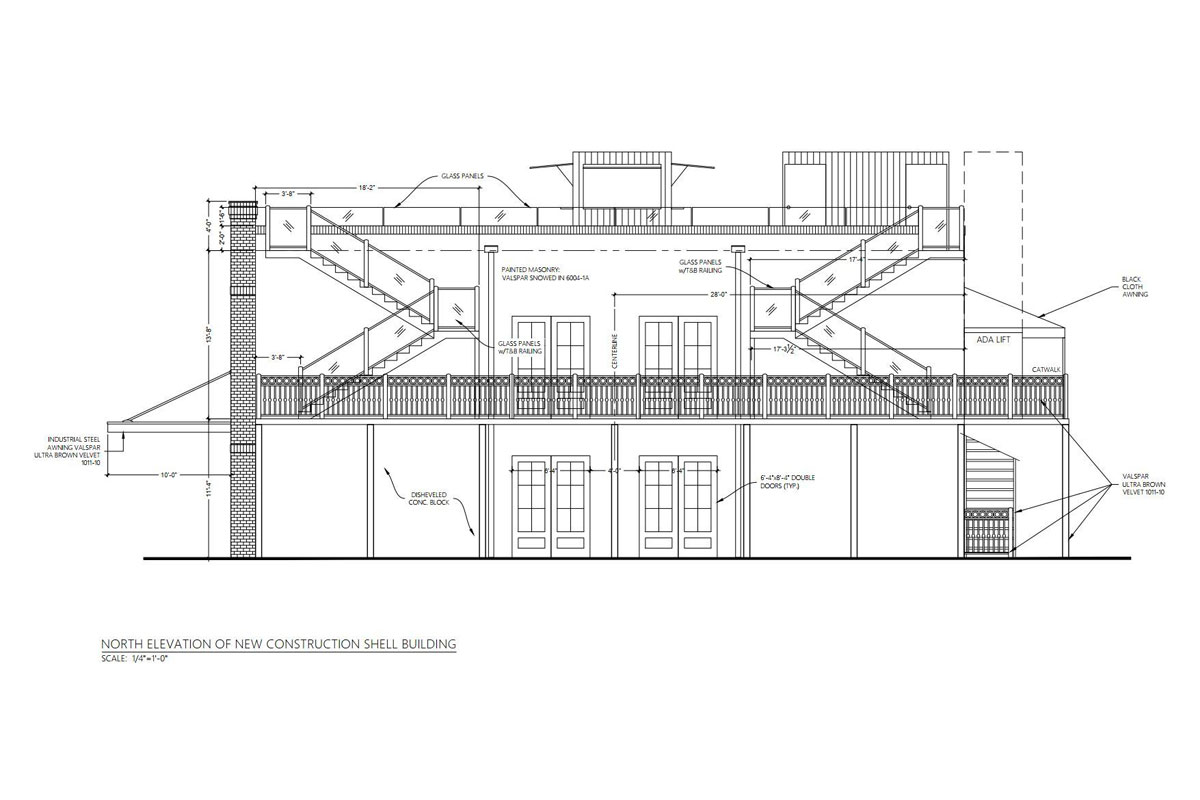 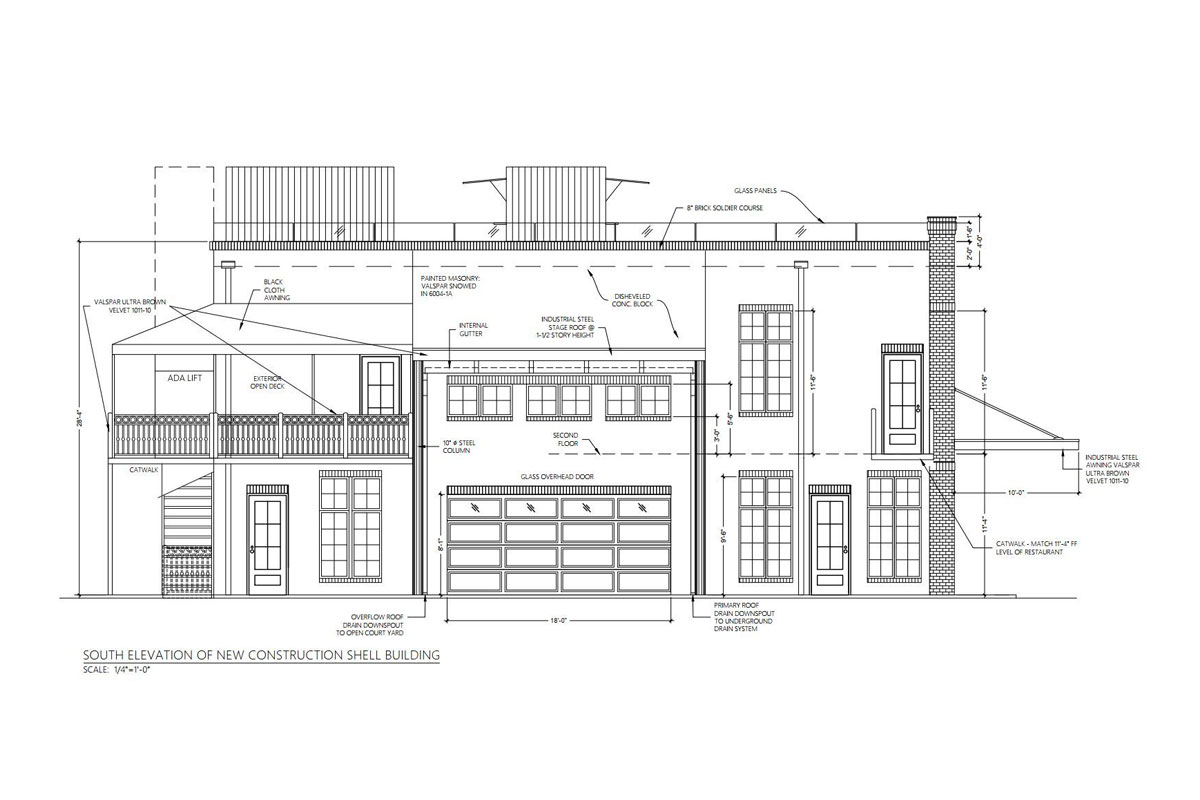 A year from now, if one were to stand on the north end of the lot (on 2nd street) looking south (towards 3rd street), the distillery and overall project will be quite eye-catching.  Two spacious decks will prominently overlook the glass-fronted façade, with a large wrought-iron stairs up to the arched entrance, which Nation anticipates being lit by LEDs that will be visible to pedestrians walking on 1st street and beckon them to come explore. Catwalks will connect the restaurant and distillery on both the east and west sides of the building, their glass panes wrapping around the façade. The distillery can be accessed from 2nd street and via the restaurant on the second floor via the catwalks. An elevator installed for ADA compliance, jettisoning visitors from the ground floor to the mezzanine and the rooftop bar which will be situated atop the 5” thick concrete and corrugated steel roof.

One of the most intriguing design concepts are located upon the rooftop bar, which overlooks the stage.  Large repurposed corrugated metal shipping containers will be used for both the restrooms and the bar itself, all prominent, visible and eye catching from the street, the mezzanine, and the restaurant. “People will see the stairs, LED lights, the containers, and people up there, and say ‘Yeah. We want to go there’,” said Nation. 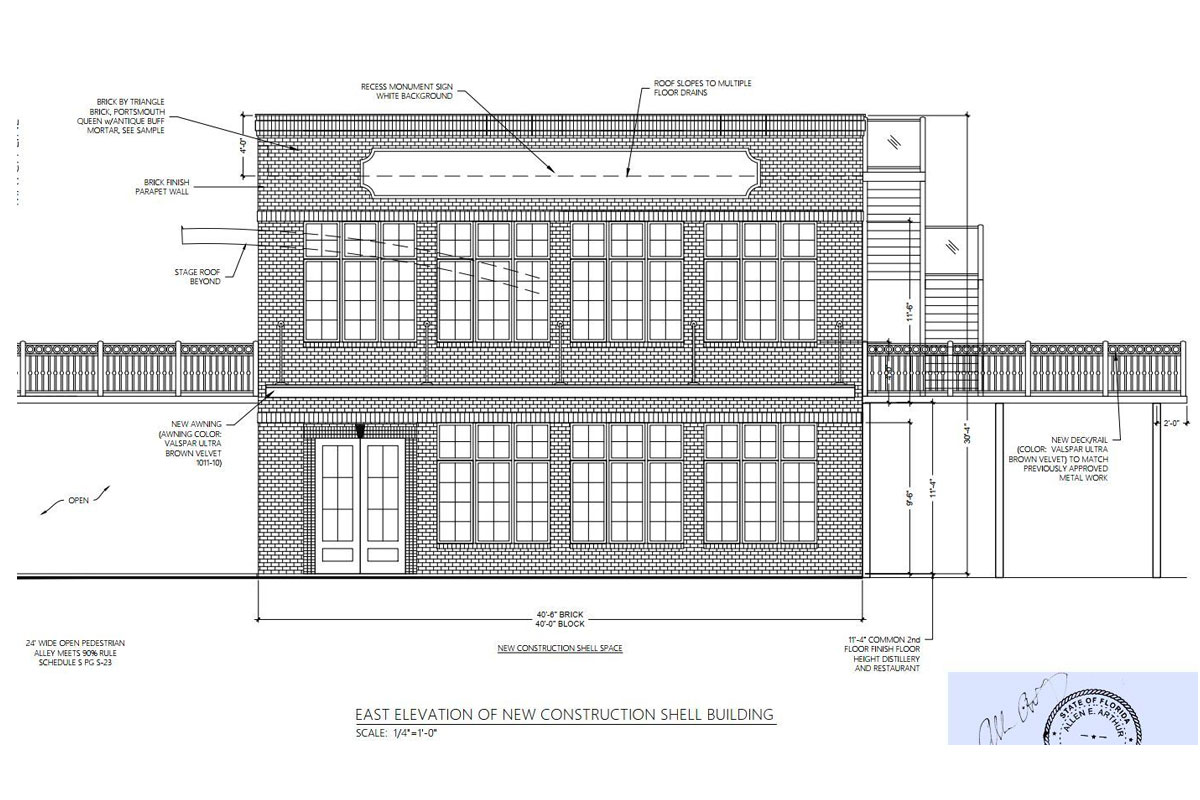 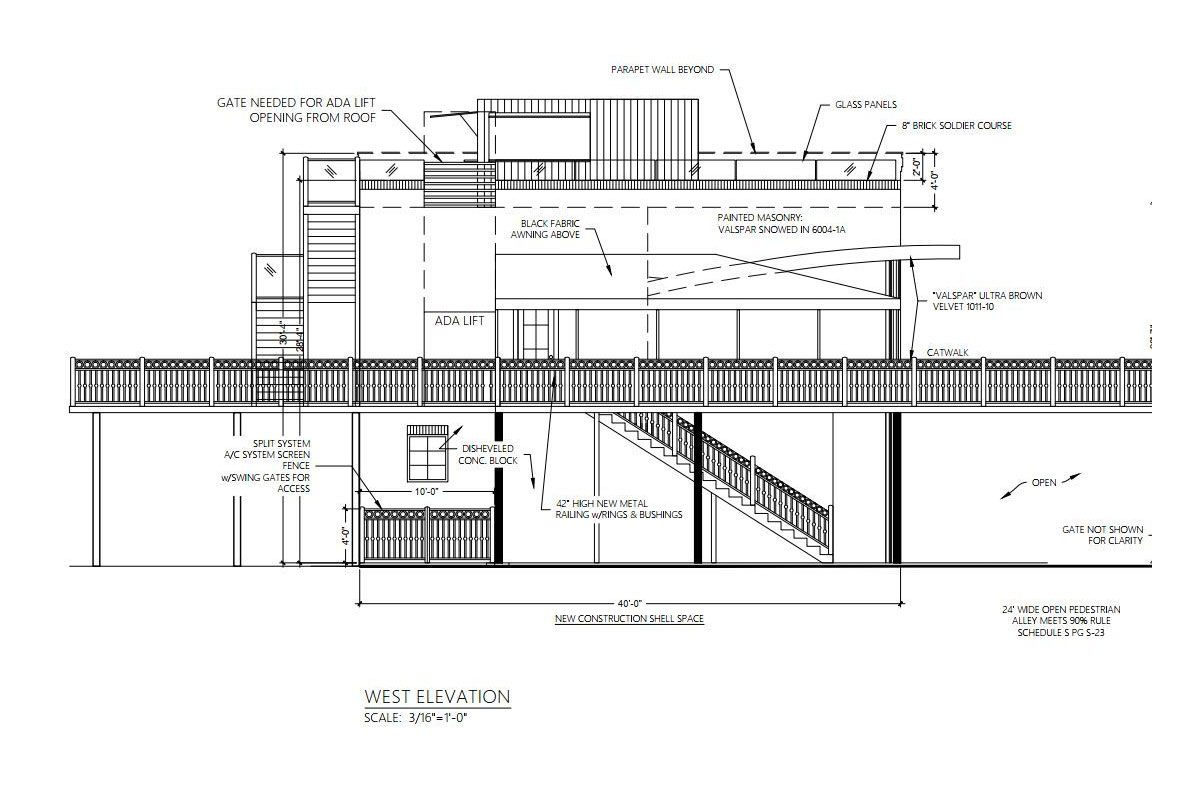 Nation stresses the enjoyment of his future patrons over sheer profits as he discusses his plans for a comfortable venue, and envisions his project as a ‘place to enjoy. Where you would want to visit and stay, an inviting destination.’ While there is no set timeline for Phase 1, as stated above, the project is moving forward as rapidly as possible, and this project is something we will see in 2021.

Early discussions for Phase 2, the west side of the lot that faces Tuffy’s, included a pool with bungalows that would be an amazing place to cool and refresh from the Central Florida heat, to spend time with family, and gather for events.  That may still be the end result, but for the interim Nation feels “it’s best to keep it open.  We want to use the space for gatherings, yoga, put out some Adirondack chairs, and let people enjoy it.”  Regarding the two buildings abutting the east side of the lot, 218 and 220 Oak Ave, Nation is considering 1st floor retail with 2nd floor apartments. The apartments may have vaulted ceilings and stairs to their own private rooftop terrace.

Plans filed with the City call for ample parking, ‘over and above’ the required number of spaces, with spaces being placed along the perimeter on all sides except 3rd Street. The City of Sanford also has plans to break ground in early 2021 on the Myrtle Avenue streetscape project, running along the west side of the restaurant and distillery, and running altogether from 3rd Street to Fulton Ave. This infrastructure project will widen the sidewalks for pedestrian access, upgrade the lighting, and add approximately 150 parking spaces, according to Deputy City Manager Tom George. Nation noted that his group donated 5’ of his lot to the city for the streetscape project.

Daniel R. Lewis is a two-tour USAF veteran who owns a recognized legal practice in Sanford, FL. He is heavily involved in a variety of local civic, community, and charitable functions.