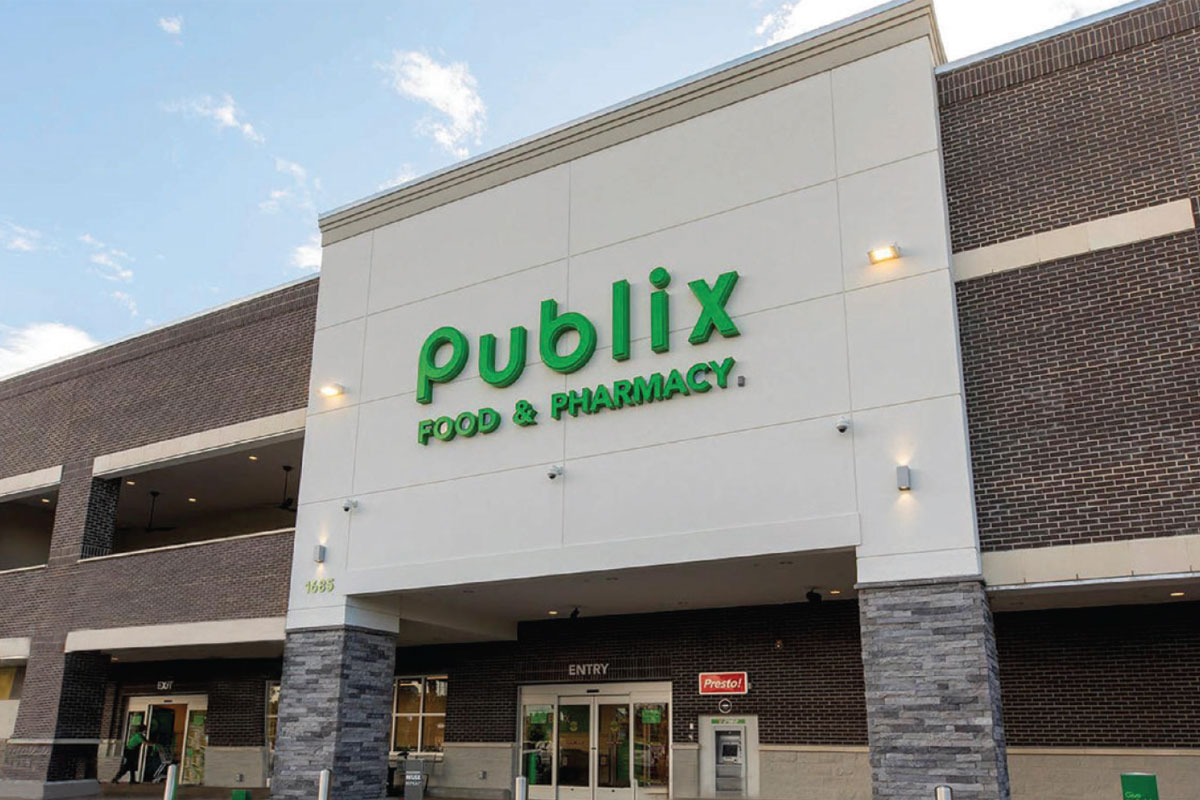 Since 1891, the King family has lived in and invested in the City of Sanford; a pending large scale development anchored by grocery giant Publix and convenience store WaWa will memorialize the King family name. Speaking with James Dunn King, who owned the land for decades with his father, late real estate mogul Walter King, the King family has long held a vision that this nearly 25-acre parcel located at the crossroads of SR 46 and Lake Mary Boulevard would be a key catalyst and a huge boon for both the City of Sanford and the residents of rural eastern Seminole County.

Jim Dunn King grew up in Sanford. “I used to sell newspapers on the corner of Park Ave in Sanford when I was a kid,” said King, “and then worked in the real estate business with my father for years.” After the Sanford Airport was built, both father and son shared a vision for what the Lake Mary Boulevard corridor and this intersection located in the southeast of Sanford could be, and the potential impact for both Sanford and Seminole County residents. “A shopping center, located right by the Sanford International Airport, would bring thousands of jobs and massive revenue for the city. And the City has been great to work with. But I really wanted to deliver this project for the rural population of eastern Seminole County. To have to drive an hour to get to a Publix, spend an hour or two shopping, and then an hour to get home, you have spent your entire day.”

Driven by this desire to locate a major shopping center at this location, King held out for years, only recently selling the parcel to prominent developer North American Development Group in a deal contingent on NADG being able to bring Publix back to Sanford. “I held out for the opportunity to develop the parcel all at one time,” King stated, “and Publix is capable of developing the entire 25 acres. I was determined to sell all of the land, or none. This (project) will kick the whole eastern side of Seminole County off. Publix is a benchmark, it draws in everything. This is for the people of the county. For the City of Sanford.”

Additionally, the development bearing the name “King’s Crossing” is for the legacy of the King family, who have been involved with real estate and development in the city for generations. King told me that he intends to stay with the project to “help (NADG) get to the finish line, and not for compensation, I have already been paid. But I will help them bring this to completion with the City of Sanford.”

Development Details and Economic Impact for the City of Sanford

King’s Crossing will be a nearly 25-acre shopping center with new commercial, retail, and residential development, located on the southeast corner of SR 46 and Lake Mary Boulevard in Sanford, FL. Construction is anticipated to be completed by late 2023. WaWa will be placed on the northwest corner of the property, on the corner, and the over 48,000 SF Publix will be located near the center of the parcel. The eastern half of the site will house a 261-unit apartment complex, separated from the Publix by a pond. There are numerous commercial parcels available per the site plan; plans call for spaces on the west of parcel fronting Lake Mary Boulevard (1400, 1200, 1200, and 2800 SF with patio, with multiple parcels available to contain a drive-thru) There are more commercial spaces available adjacent to Publix (2800, 1400, 1400 SF, next to Publix Liquors and Grand Nail Lounge) 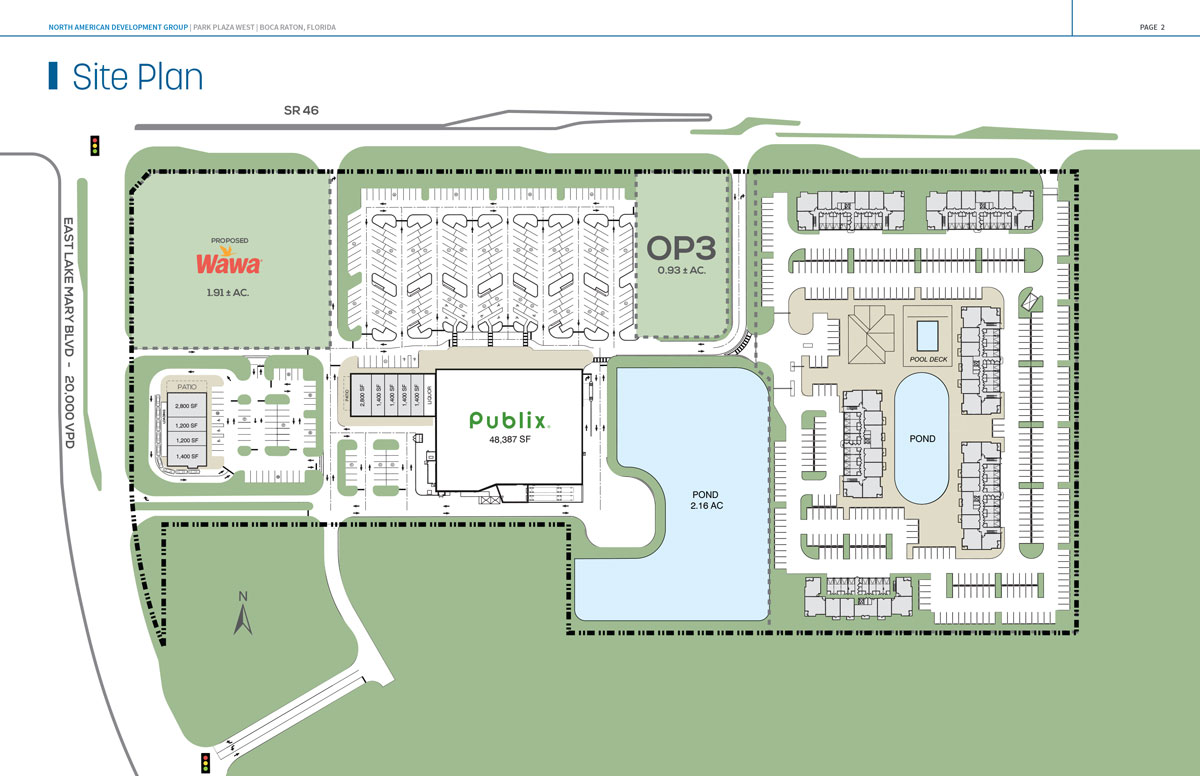 It is hard to underestimate the economic impact Kings Crossing will have for the City of Sanford. The property taxes generated from Kings Crossing will be a much-needed shot in the arm to the city budget, and numerous jobs will be created. With 261 apartments coming available by the end of next year, Sanford could stand to gain another 1000 residents along the Lake Mary Boulevard corridor, a stretch of the city that has recently seen massive commercial and residential growth built near the Sanford International Airport. This influx of residents living, working, and playing in Sanford will have additional economic benefits to existing businesses in and around Sanford.

The City of Sanford is excited for this project. “The King’s Crossing Development is a critical piece of the economic development footprint of the East Lake Mary Boulevard Corridor. A Publix anchored shopping center, along with other supportive retail, is essential for the continued development of both residential and commercial uses. Having a top-notch grocer in the area will be a clear benefit to residents along the corridor,” says Pamela Lynch, City of Sanford Economic Development.

Director of Economic Development Tom Tomerlin agrees, and states that “Additionally, having retail services in the area will help spur on additional commercial economic development. We have always viewed the Airport, and the surrounding area, as a budding employment center for the region. Quality retail development will help employers, and their employees, access services at a convenient location.”

Lifelong Sanford resident and 2-term City Commissioner Patrick Austin sees the value of this project for the people of Sanford. “It’s great to see Publix choosing this location in the City of Sanford. The Lake Mary Boulevard corridor is growing and bringing many good things to our City for both our residents and visitors to enjoy.”