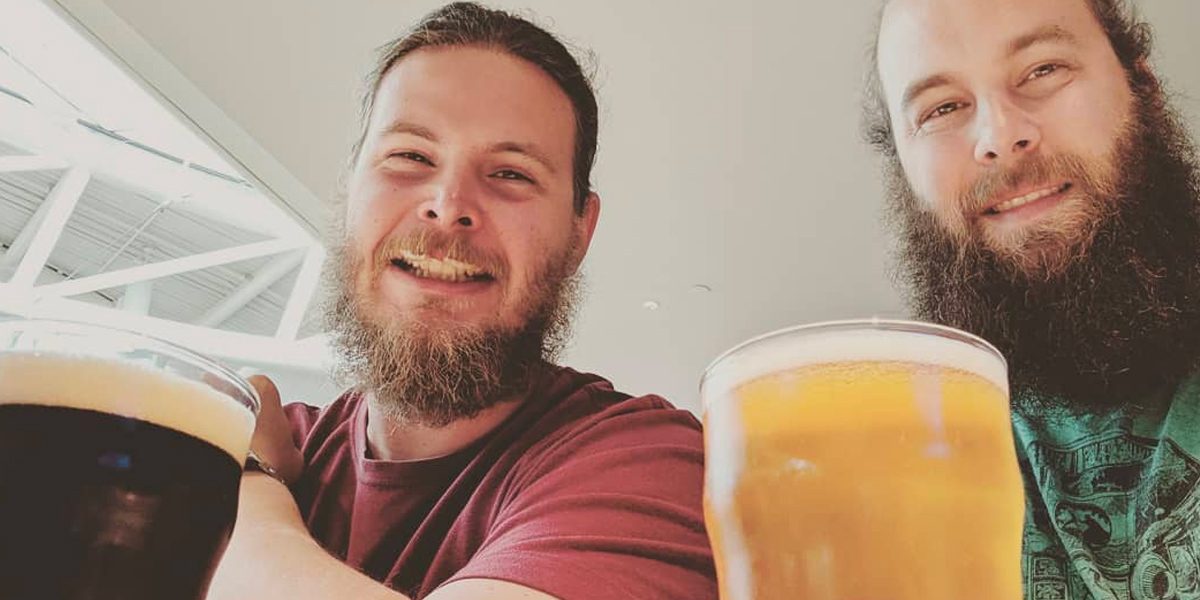 Benjamin and Michael Dees – the Dees Brothers – are excited to join the craft beer party in Historic Downtown Sanford. In December of 2018, after receiving the green light for build out of brewery operations from the City of Sanford, the brothers purchased the 1919 building located at 210 Magnolia Ave. right across from the Wayne Densch Performing Arts Center, ending a decades-long period of vacancy. 100 years ago in 1919, this building was home to another business run by a pair of brothers, Wight Bros. Tires (see gallery). Previous to a 1979 fire that destroyed two-thirds of the building that once occupied nearly the entire block of Magnolia Ave between 2nd and 3rd Streets, the building had served both as a Buick dealership and a paint store.

Once this building is returned to occupancy – and the property tax roll – Dees Brothers Brewery will operate as Sanford’s 6th craft brewery, part of a larger craft scene that also currently includes a cidery, a distillery, and amazing craft beer bars. “The growth in craft beer is still alive,” said Sanford Economic Development Director Bob Turk, “and what started here with Wops Hops Brewing Company five years ago has grown every year.”

A Brief History of Sanford Craft

Craft beer in Sanford has many roots, stories, and origins, but direct links to the existing scene can be traced back to a pair of influences. Mike Smith, currently the General Manager of The Imperial at Washburn Imports and The Sullivan a Public House, was introducing craft beer to the Sanford scene over a decade ago as a beer distributor for Unique Beers, the first craft beer distributor in Florida. “In 2006, Sanford had 12 bars, and they served the same 12 beers,” joked Smith. “I was going door to door, selling them something I had seen and enjoyed while living and working in New York City and Chicago. Sanford was a little resistant at that time.” Smith left the distribution of craft beer in 2011, and in 2012 launched The Imperial at Washburn Imports as an all craft beer, craft cocktail bar that has become a Sanford staple.

The Sanford Homebrew Shop in Magnolia Square opened before any of the breweries in Sanford, and in fact has been a vehicle through which Gary Holmes and Aaron Libera have both imparted their knowledge and passion for homebrewing. Over the last several years, The Sanford Homebrew Shop has seen some once curious and interested novices go on to open up breweries of their own. Owners of Sanford Brewing Company can trace their brewing roots to the Sanford HomeBrew Shop, and Benjamin Dees in particular praises Aaron Libera and the Sanford Home Brew Club, which the brothers joined in 2012, for the origins of their brewing career.

The first brewery in Sanford was Wop’s Hops Brewing Company, which opened in October of 2014. Recently celebrating his 5th Anniversary, co-owner Greg Piecora has seen the craft beer scene continue to grow and evolve in Sanford. Neighbor Sanford Brewing Company followed Wop’s to Sanford Avenue two years later, and the location directly across the street has allowed the two breweries to collaborate on a variety of events and more. “One of the things about craft beer is that the industry is very different than most in that it is more about collaboration, contribution, and community,” said Robyn Esser, partner in Sanford Brewing Company. “Sure, there are friendly jests and proud brags about winning a competition, but on the whole its entire culture (is) based on supporting, drinking great beer, and encouraging other brewers.”

Followed in 2016 by Celery City Craft, a bar which boasts over 50 craft beers on tap, and by Tuffy’s Bottle Shop & Lounge in 2017, where owner Dan St. Pierre of Central 28 Beer Company fame brews cider in-house, Sanford was well on its way to being Florida’s craft beer destination. A further expansion occurred in 2018, when Sanford welcomed our 4th and 5th breweries, Inner Compass Brewing Company and Deviant Wolfe Brewing. Partner in Deviant Wolfe Brewing Kendall Wolverton states that “we have a love for adventure and the outdoors. Sanford is not only our home because of the trails, lake, and parks, but also because of our supportive and unique beer and resident community.”

The variety and uniqueness inherent in each brewery Wolverton points to adds much to the overall attraction for craft beer consumers. As Sanford Brewing’s Esser points out, “you have to be pouring quality liquid, or (being a craft destination) won’t last long, but we’re aces on that too. The variety and approach with each one of Sanford’s breweries.”

What will Dees Brothers Brewing be Bringing?

Our stage has been set. Dees Brothers Brewing will enter the most ‘hoppening’ craft beer scene in Central Florida as Sanford’s 6th brewery. Michael and Benjamin both mentioned the desirability of bringing a concept to the existing craft beer community in place. What will they bring to the table? Expecting a launch in 2020, Dees Brothers is currently finalizing their plans with engineers and anticipates beginning build out very soon. They will have a large in house brewing operation that utilizes a 10 barrel system, large seating areas surrounding the taproom, and an ‘almost full’ kitchen that features sandwiches, soups, a full vegan menu, and appetizers.

When asked what they do well, Michael Dees said “We make good, regular beer. Multiple beers that are traditional and sessionable. We are genuine people, not a conglomerate.’ That passion comes through in every pour, and fits well within Sanford’s scene.

You don’t need to be crafty to find a great reason to go #Sanfording, but it doesn’t hurt. Our craft scene is a major economic and tourism driver that continues to grow, and as it does, continues the growth of our city. With more on the way, Sanford’s embrace of craft culture promises to keep me busy updating you on all the newcomers!