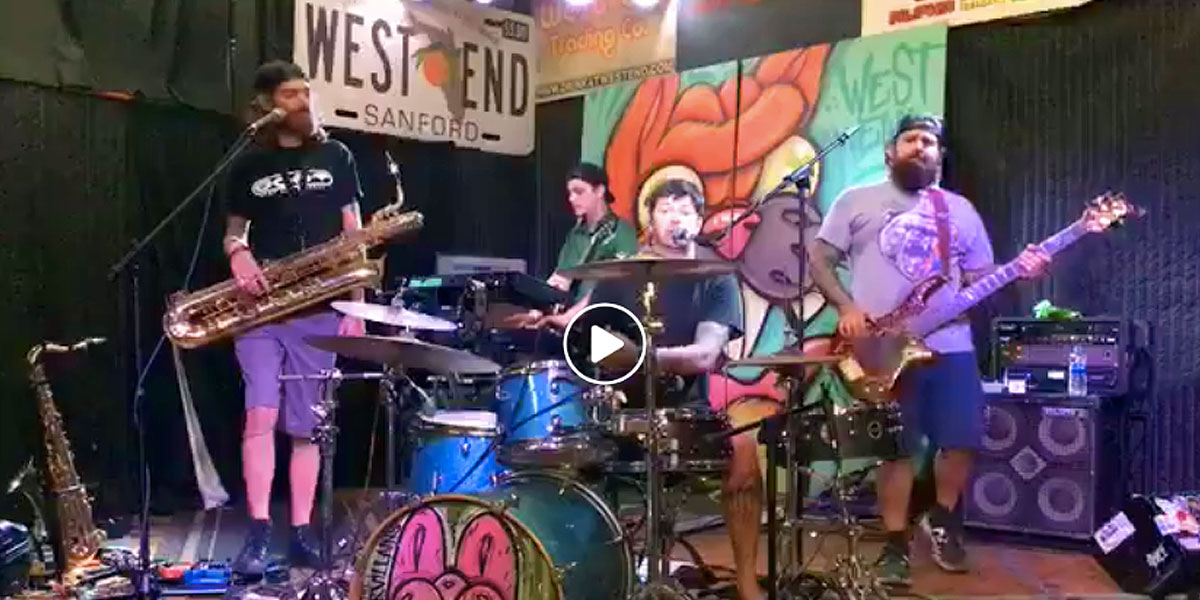 The Supervillains and Friends Live-Streaming on Facebook at West End Trading Co.

Following in the immediate wake of Orlando’s No Day Off livestreamed music telethon over the weekend, Historic Downtown Sanford is getting in on the action with a week’s worth of livestream shows from mainstay venue West End Trading Co. It’s an idea with legs, putting some money in bands’ pockets directly through online donations, keeping the venue in watchers’ minds, and hopefully spurring some extra curbside packaged spirit and, of course, wings sales. Not to mention live entertainment for those of us hunkered down for the foreseeable.

The venue kicked this program off on Monday – while simultaneously working out the kinks – with a “test” set from Central Florida ska-punks the Supervillains. And though the band, calling themselves the Villains for the night, were down a member with guitarist/vocalist Skart unable to make it, they rallied with an ad hoc redistribution of labor that saw drummer Dom front and center, handling all the vocals.

The evening started with an acoustic solo set courtesy Supervillains keyboardist/guitarist Tom “T-Rex” Moulton, and after a brief pause, for one night only, the Villains hit the stage. Even down a man, the Villains create high-level ska-punk with extra heft courtesy Josh’ sax and T-Rex’s keyboard runs. The music is manic, snotty, unafraid to offend and hard-charging, but the occasional nods to dubby disorientation were much appreciated. Despite the lack of an audience, the band conducted themselves as if they were in front of a packed club (and to be fair, there were hundreds of eyes watching from various couches and beds). The Seinfeld theme over the house speakers was the perfect note to end on.

The livestream looked great, with the band up on West End’s stage for a more “concert” feel, and though it was a static camera shot, the band was animated enough physically to make up for it. It sounded fantastic, with no sound issues that we could detect. Having a member of the production crew intermittently handing Dom sheets of paper with audience requests was clever and appreciated.

The full Supervillains band will be playing West End (and Facebook Live) this Friday night. All the hits are promised. Worth a watch.

Matthew Moyer is a music and arts writer and enthusiast living in Orlando. He loves his cat very much.